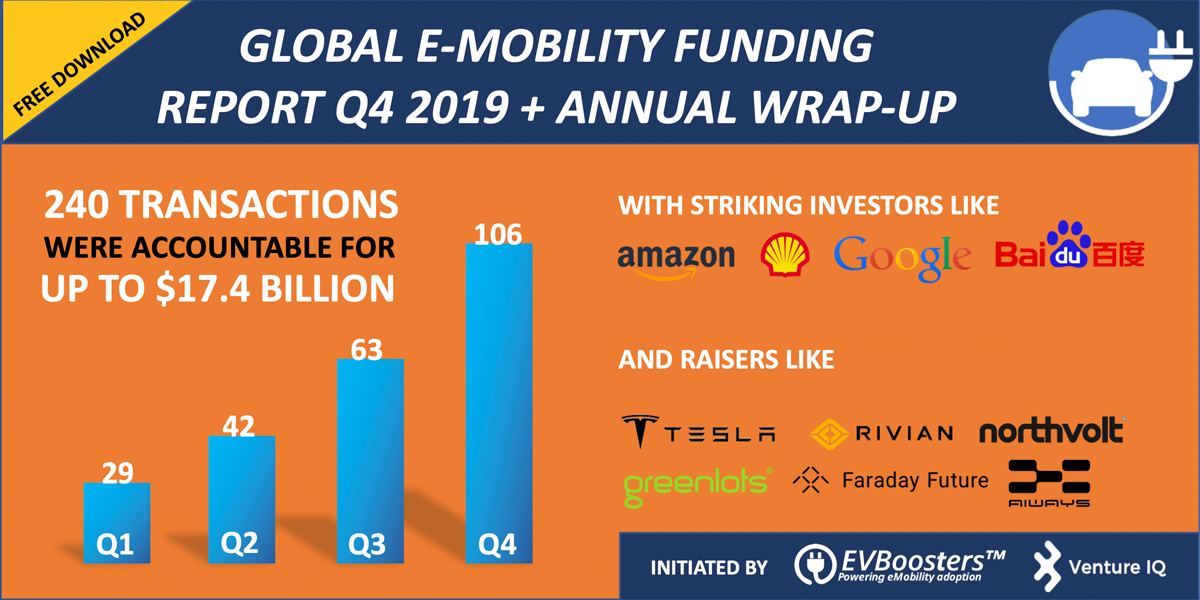 Despite the challenges associated with transitioning to eMobility, the global uptake of going electric is accelerating in numerous countries. About three million public charging points will be needed for 44 million electric vehicles in 2030 if the EU is to become climate neutral by 2050, as per a report by Transport & Environment (T&E). That means, over 15 times of the 1,85,000 current public chargers will be required to keep up with the growing market ahead of 2020. The shift of turning electric will create a multi-billion Euro market opportunity for the European market. This will also generate jobs in the grid works, manufacturing, installation and maintenance of new public charging stations.

The electric vehicle charging stations market is projected to reach USD 27.7 billion by 2027 from an estimated USD 2.5 billion in 2019, at a CAGR of 34.7% during 2020-2027. Increasing investments made by governments across the globe to develop charging infrastructure creates opportunities for OEMs to expand their revenue stream and geographical presence. The European market is projected to experience steady growth, owing to the well-developed infrastructure for electric vehicles according to the world’s largest revenue impact company, MarketsandMarkets.

Market giants such as Intel, Airbus, Samsung, Goldman Sachs, Alliance and Accel have entered the eMobility space as financial investors along with big technology companies like Google, Baidu, or Tencent have continued their involvement as strategic EV investors. Apart from venture capitalists (VC’s), numerous corporate venture entities of Fortune 500 companies stepped in last year to invest in the growing multi-billion Euro market. Utilities, oil and gas companies are rapidly taking advantage of these investment opportunities by acquiring and investing in start-ups.

“Fundraising is a continuous process for most EV Start-and Scaleups.”, said Paul Jan Jacobs, speaker and advisory board member for the EV Charging Infrastructure and Technology Expo from 30th September - 2nd October 2020 at MECC, Maastricht.

Dutch consultancy EVBoosters has released its latest funding report for 2019, with some of the trending developments reported here. Expect number-crunching covering Q4 in e-mobility funding and investment insights.

Over the course of 2019, e-mobility has become the new tech market when it comes to investors eager to gain ground in a growing field. Established technology funders such as Intel, Airbus, Samsung, Goldman Sachs, Alliance and Accel entered the space as financial investors. At the same time, big tech companies such as Google, Baidu, or Tencent continued their involvement, now often as strategic EV investors rather than technology drivers themselves. Besides venture capitalists (VC’s), many corporate venture entities of Fortune 500 companies stepped in last year.

For example, Baidu invested in WM Motors in the first quarter of 2019, a promising Chinese EV Manufacturer. Electronica giant Samsung invested during the second quarter in European battery manufacturer Northvolt, as did IKEA, Goldman Sachs, Siemens and BMW. Also, this last quarter, chip manufacturer Intel acquired a minority share of Israeli battery maker Addionics, to name but a few.

EVBoosters, the Dutch e-Mobility consultancy estimated, in cooperation with analyst company Venture IQ, that a total of 240 transactions raised up to $17 billion in 2019. As in Q3/2019, they gathered this information via Crunchbase, Pitchbook and their network of EV companies.

A total of $11,9 Billion is raised based on 164 traceable transactions, with an average value per transaction of $72 million. 76 companies didn’t disclose any financial details. Based on these numbers the analysts projected that all EV related companies raised a total of $15 billion and up to $17 billion throughout 2019. Based on this, Paul Jan Jacobs, Founder of EVBoosters, projects that EV companies worldwide will raise even more than $20 billion by the end of 2020.

Fundraising is a continuous process for most EV Start-and Scaleups

At present, the most successful e-mobility startups seem to make it into almost every edition of the quarterly report, simply because their need for money never appears to stop. Tesla was first to know this when two out of five Tesla founders, Martin Eberhard and Marc Tarpenning described in 2018 how after every successful step, like finishing a design goal or a successful test, they went back on the fundraising beat to get investment for the next goal.

The same is true for Tesla rival Rivian that is showing the most active scaleup in 2019 with a total of $2.9 billion raised. The EV manufacturer to be will also feature prominently in the Q1/2020 report with $1.3 billion raised in a month. Production will start later in 2020 with deliveries to follow a year later. One of the customers awaiting delivery in 2021 is Amazon who ordered 100,000 electric vans based on the Rivian platform. With such an order, the survival of the first phase of being a real, production company is very likely.

Another recurring name is Bird with its electric scooters. In Q4 it raised another $275 million and in Q1/2020 it will be present as the buyer of German rival Circ, while also raising $75 million in extra pocket money. Bird is facing the double challenge of growing fast while having to increase efficiency. Together with Circ, Bird has better opportunities to manage micro-mobility together with cities.

The most e-mobility companies seeking financing in Q4 2019 were situated in the USA, according to the TechCrunch database. However, Germany is catching up. The number of fundraisings grew from 4 to 12 with companies like Compleo, eliso and Blue Inductive (Charging station OEM), to CleverShuttle (Shared Electric Mobility) and chargeIT (CPO) that was 100% acquired by the Dutch Eneco eMobility to strengthen its position in the neighbouring country.

The rising star on the German sky is Sono Motors. When the startup’s values (affordable and sustainable) collided with short-term targets of investors (fast-growth and profit maximisation), Sono Motors switched to a model of crowdfunding, using the deposits of its reservation holders as company capital. In January the crowdfunding campaign ended, surpassing the ambitious goal of €50 million with €3 extra millions.

It all starts with battery production capacity to drive growth

The key enabling technologies for the adoption of e-mobility are access to batteries and charging infrastructure and battery cell supply has become an issue to scaling up EV production. More carmakers are investing in battery makers to secure supply chains. In Q4/2019, Daimler increased its stake in Sila Nanotechnologies, a supplier of advanced electrode materials. Toyota has confirmed an EV Battery joint venture with Panasonic, VW is increasing production in its partnership with Northvolt, and PSA is building two large battery factories using technology from battery maker Saft. This is the switch in focus from carmakers that will enable a more secure supply of this essential part of all BEV.

These ambitions are set by Bert Klerk who is the chairman and one of the advisory board members for the expo in Maastricht. The approach for charging infrastructure is that charging of an electric car should be as easy as charging a smartphone.

“The market is maturing across Europe and we are seeing an increase in interest in electric vehicle charging infrastructure,” said Manuel Fernandes who is the President of Tritium Europe. “This year we opened the TRITIUM E-MOBILITY INNOVATION CENTRE in Amsterdam to cater to this growth, and we will continue to add to our team to meet the market while continually innovating to stay ahead of it.”

US needs to invest $2.2 billion to meet EV Charging demand through 2025 according to International Council on Clean Transportation (ICCT). Since 2010, 61 EV charging infrastructure vendors have raised a cumulative total of $1.7 billion across 133 investment rounds. A total of 29% of these rounds did not disclose the investment value, indicating value of the investments is even higher. Vendors strategically acquire companies that strengthen their current EV charging offerings or open a new regional market. Acquisitions of these vendors by utilities reflects a shift in utility mindset and business model. In Europe, most of the charging infrastructure is operated by utilities. Leading utilities such as Enel, Eneco and Vandebron will be present at the expo in September.